A Day to Remember w/ Beartooth and Silverstein 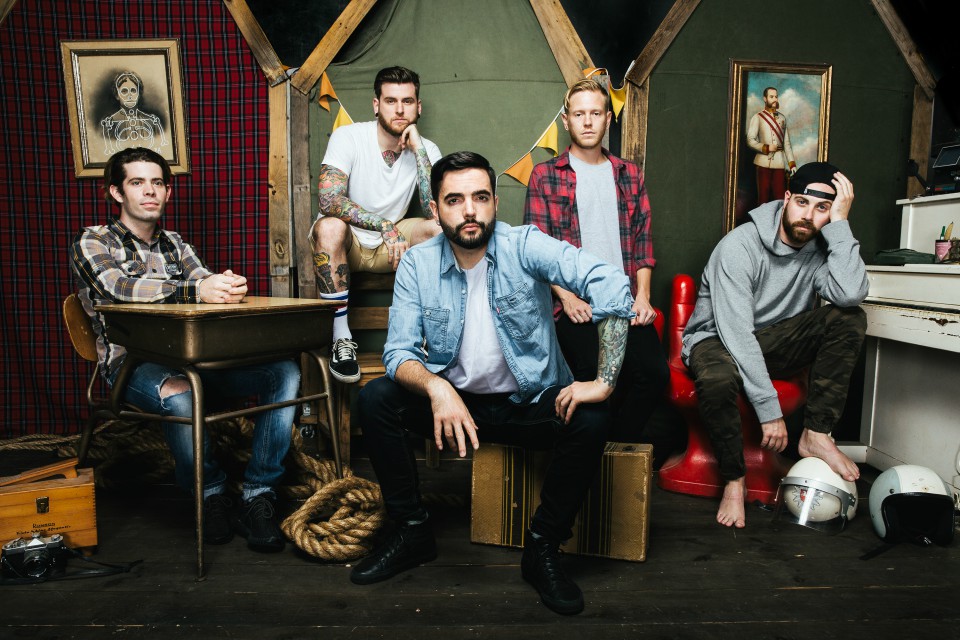 A Day to Remember with Beartooth & Silverstein

Over the course of the past several years, each of A Day To Remember’s releases have hit No. 1 on Billboard’s Rock, Indie and/or Alternative Charts. They’ve also sold more than a million units, racked up over 400 million Spotify streams and 500 million YouTube views, garnered two gold-selling albums and singles (and one silver album in the UK) and sold out entire continental tours (including their own curated Self Help Festival), amassing a global fan base whose members number in the millions. All of which explains why Rolling Stone called them “An Artist You Need To Know.” In other words, their creative process has worked and worked well.

But for new album Bad Vibrations, the Ocala, Florida-based quintet of vocalist Jeremy McKinnon, guitarists Kevin Skaff and Neil Westfall, bassist Joshua Woodard and drummer Alex Shelnutt switched gears and headed for uncharted territory. Their path included a loose and much more collaborative songwriting process, one that also saw them recording for the first time with producers Bill Stevenson (Descendents, Black Flag) and Jason Livermore (Rise Against, NOFX). And though the album’s being released on the band’s own ADTR Records (like 2013′s Common Courtesy), this record marks their first distribution deal with Epitaph and is the first time they’ve worked with Grammy winner Andy Wallace (Foo Fighters, Slayer), who was brought in to mix.

“We completely changed the way we wrote, recorded and mixed this album,” says vocalist Jeremy McKinnon. “It was one of the most unique recording experiences we’ve ever had. We rented a cabin in the Colorado mountains and just wrote with the five of us together in a room, which was the polar opposite of the last three albums we’ve made. We just let things happen organically and in the moment. I think it forever changed the way we make music. And working with Bill was an awesome experience. He was a bit hard to read at first, so I think we subconsciously pushed ourselves harder to try to impress him. As a result, we gave this album everything we had.”

Recorded at Stevenson’s Fort Collins-based Blasting Room Studios, Bad Vibrations masterfully channels the kinetic energy that recently found A Day To Remember named “The Best Live Band Of 2015″ by Alternative Press. The band decided to forgo digitally driven production and focus on live recording. “These days it seems like a lot of heavy sounding music is heading more and more in a digital direction,” notes McKinnon. “That’s not necessarily a bad thing, but we wanted to go the opposite way and make something that’s aggressive but has more of a natural flow and feel to it.”

By powering Bad Vibrations with so much raw passion, A Day To Remember ultimately deliver some of their most emotionally intense material to date. “I’m like a child screaming in a room when I write,” laughs McKinnon. “I’m singing about the things that are frustrating me, but at some point there’s an arc within the song. It’s almost like I’m giving advice to another person about whatever I’m struggling with, but I think I’m really just trying to give that advice to myself.”

The catharsis-inducing album sees the band tackling duplicity and deception (on the gloriously frenzied ‘Same About You’), the destructive nature of judgmental behavior (on ‘Justified,’ a track shot through with soaring harmonies and sprawling guitar work), addiction (on the darkly charged ‘Reassemble’), and friendship poisoned by unchecked ego (on ‘Bullfight,’ a track with a classic-punk chorus that brilliantly gives way to a Viking-metal-inspired bridge).

‘Paranoia,’ one of the most urgent tracks on Bad Vibrations, fuses fitful tempos and thrashing riffs in its powerful portrait of mental unraveling—an idea born from the band’s commitment to close collaboration in making the album. “Originally it was a joke song about someone being paranoid, but then Neil and Kevin and I started brainstorming lyrics together, which we’d never done before,” recalls McKinnon. “It ended up being shaped so that the verse is a person talking to a psychiatrist, the pre-chorus is the psychiatrist talking back to that person, and then the chorus is paranoia personified. The whole thing just exploded and came together in this really cool way.”

On ‘Naivety,’ the band slips into a melancholy mood that’s perfectly matched by the song’s bittersweet, pop-perfect melody. Says McKinnon, “It’s about that journey when you’re getting older and starting to view the world as a little less magical than you used to, and you’re missing that youthful enthusiasm from when you were a kid.”

Ultimately, McKinnon says that this particular album-making process breathed new life into the band. “Breaking out of our comfort zone and working in a less controlled way, we ended up making something that feels good to everyone, and we can’t wait to go out and tour on it,” he says. “I think a big part of why our music connects with people is that they’re able to get such an emotional release from our songs. And while most of the songs are me venting about whatever’s affecting me at the time, people who are going through something similar can see that it’s coming from a real, honest place. That’s really the core of what A Day To Remember has always been.”

Bad Vibrations debuted at #2 on the Billboard 200 and #1 on the Top Album Sales Chart. It was also the #1 album in Australia, #6 in the UK and #7 in Germany. After a summer / fall tour with Blink-182, A Day To Remember headlined the Bad Vibes World Tour in Australia, the United Kingdom, Europe and Russia.

2017 has seen A Day To Remember play Download Festival in the UK and the X Games Minneapolis among other festival shows in the US and Europe. On March 18th, the band received the keys to the city of Ocala from Mayor Kent Guinn and performed a sold out hometown concert before supporting Avenged Sevenfold on select dates of their summer tour, playing their own headline shows with support from Moose Blood and Wage War and presenting 3 stops of their Self Help Festival. In October, Jeremy McKinnon joined Linkin Park on stage at the Hollywood Bowl to perform ‘A Place For My Head’ in honor of Chester Bennington.

In 2018, A Day To Remember will celebrate 15 years of being a band with a headline US tour alongside special guests Papa Roach, Falling In Reverse, and The Devil Wears Prada. That tour includes a headline slot at Self Help Festival in San Bernardino, California on March 3rd.