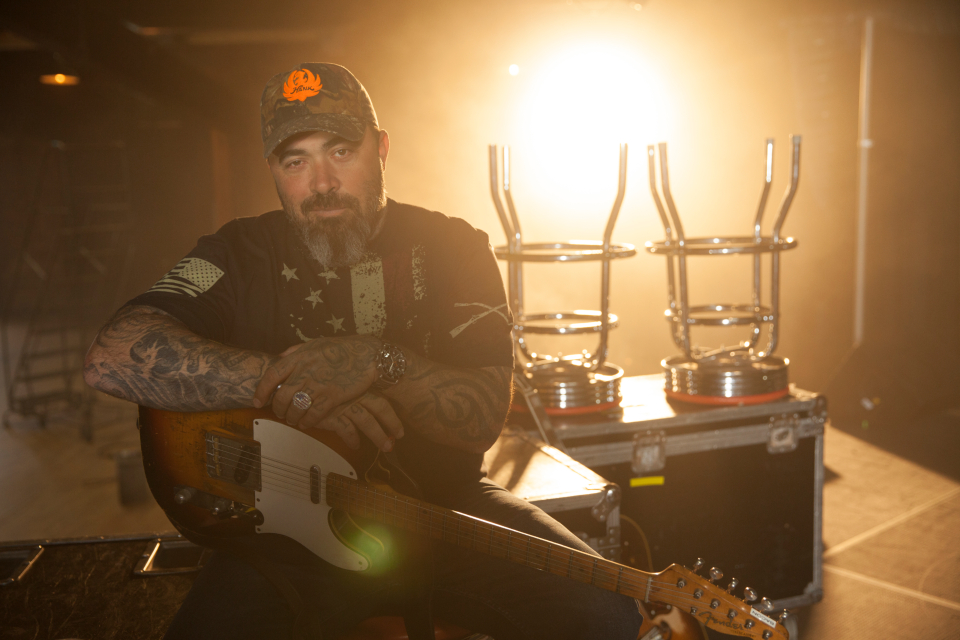 If it sounds like Aaron Lewis is long past defending his Country music pedigree, that would be a correct assessment. Lewis would prefer the music speak for itself and, with the release of SINNER, Lewis’ stunning Dot Records follow-up to his groundbreaking full-length solo debut The Road in 2012, any would-be detractors will be pretty much out of ammo.

Lewis, however, is not. SINNER blasts through today’s Country music doldrums like a shot of 100-proof whiskey, with the singer making zero compromises with either himself or the restrictions of a format that seems to have abandoned its rougher tendencies in favor of pop and ‘70s rock inclinations largely lacking in grit.

“I’d like to think that SINNER is a newer take on classic, traditional Outlaw Country, Waylon and Merle and Willie, and Hank Jr. and Johnny Cash and all that stuff,” says Lewis. “That was the music I heard as a kid, and that’s the Country music that permeated my soul and stuck with me my whole life.”

Lewis admits he “didn’t really pay attention to any of the Country music in between” that early Outlaw exposure and his emergence as a new voice for the genre with the release of “Country Boy” on the Town Line EP in 2011. “I was too busy going down the road of one day ending up being in a rock band, and revolting against the music I was basically force-fed as a kid,” he says. “I finally came around full circle, and this music crept back into my life. My plumber at the time bet me that I wouldn’t write a Country song, so I sat down and wrote ‘Country Boy,’ and the rest is history.”

As the front man for one of modern rock’s most successful bands in Staind, Lewis admits his entre into the Country world has been met with mixed reactions. “I have definitely dealt with some of the old guard questioning my commitment to the genre, questioning how much of this might be a toe-dipping in the water to see what the temperature is,” he says. “I had, and still have, a very established career in the rock world, and as much as that has been a blessing in some ways, it has been a curse in others in trying to be looked at as somebody who is taking this seriously and isn’t just trying to go where the money is. There has been a pretty big misconception I’ve had to battle, but there has also been lots of support. There have been times I’ve been told by a program director that my record was his favorite that came out that year but he couldn’t play it because it’s ‘too Country.’ The landscape of Country radio today doesn’t really leave any room for an artist like myself that has no desire to mix pop music with Country music. Why would I do that?”

Few pop-tinged songs would dare feature lyrics as candid, biting and personal as those on SINNER. If “Country Boy,” with it’s swaggering bravado, was the opening salvo, the 11 songs on SINNER herald a man who admits—and often deeply regrets—his personal shortcomings, yet offers no excuses. “This is an album of acknowledgement, admittance, moments of self-awareness,” he says. “It has been a pretty trying time in my life over the past few years, and these songs are what have come of it. At the risk of sounding cliché, my music has always been therapeutic for me.”

Produced by Country legend Buddy Cannon (whose production resume boasts masterpieces with artists ranging from Kenny Chesney and George Strait to Merle Haggard and George Jones), and recorded over 16 intense hours at Nashville’s Blackbird Studios, SINNER captures what was going on in Lewis’ head at this point in his life; laid back with a soundtrack that harkens back to the Country genre’s most honest and musically adventurous artists.

“I loved working with Buddy,” says Lewis. “He’s an amazing, highly accomplished producer that really doesn’t have very many bad ideas. And he also steps back and allows you to be creative and do whatever it is you’re doing, and doesn’t try to change the vision that you have. I was able to write and record a record that I was responsible for how it came out.”

Written on tour and during infrequent down times over the past two years, and road-tested in front of fans that basically served as judge and jury for inclusion on the record, the songs on SINNER together alternate between swagger and vulnerability, biting humor and fierce independence. Lewis and his creative compadre Ben Kitterman (Lewis’ former bus driver who earned a permanent place by his side on the road and in the studio once his talent was discovered), are joined by such A-Listers as Brent Mason (guitar), Paul Franklin (steel guitar), Jim “Moose” Brown (keyboards), Bobby Terry (guitar), Pat Buchanan (guitar) and Tony Creaseman (drums). Also taking part are such country stalwarts as Mickey Raphael, Willie Nelson (who adds a committed gravitas to the title cut), Alison Krauss, Dan Tyminski and Vince Gill. Remarkably, “I think I got Vince Gill to sing the word ‘shit’ for the first time in his career,” Lewis says with a laugh.

Most of the songs were cut live in the studio, using scratch vocals. “I had a pretty good idea what I wanted the album to sound like,” says Lewis, “and then it was a matter of just going in and either playing songs for the guys in the studio live on an acoustic guitar and let them go from there; or playing them YouTube clips of the song live off of somebody’s phone. Most of the time, they didn’t even need to listen to the whole song, they got the gist of it, charted it out, and then went in there and nailed it on one or two takes. Everything is live, everybody was just playing the song and going right to tape, and then 16 hours later the recording process was complete.”

The result is an album that is “as raw and as real and as un-messed with as it could possibly be,” according to Lewis, with the energy of a “band” record and an introspective tone that completely reflects the state of mind of Aaron Lewis. Creative flourishes abound, with innovative arrangements melding with traditional honky-tonk structures and instrumentations, along with muscular ballads and powerful themes of love, loyalty, alienation and regret, tempered by a dose of humor and knowing introspection.

While Lewis’ lyrics and vocals astound throughout, perhaps the most impactful song on an immensely interesting and entertaining album is its hidden track, a version of the Bruce Robison gem “Travelin’ Soldier” featuring vocals from Lewis then-13 year-old daughter, Zoe. In her recorded vocal debut, Zoe nails it, providing an innocence and purity of tone that serve the song’s lyrics to the highest level. It’s an auspicious debut, and one Lewis admits could change his daughter’s life.

The power of Zoe’s debut begs the question of how Lewis would feel if his daughter were to embark on a career in a business he has been openly critical of. “I would be very, very cautious, and supportively against it, if that makes any sense,” he says. “It is a vicious, vicious industry, and I would have to be right there at her side, holding her hand the entire time in order to be comfortable with it. I’ve heard it all already, every possible thing you could throw at my daughter to influence her in some way, and it ain’t gonna happen.”

While SINNER may surprise those unaware of Lewis’ lyrical depth and vocal authority, hard-core fans of his concerts (which he describes as “a very healthy mix of cowboy hats, baseball caps, tattoos, black shirts”) will rejoice in having definitive copies of songs they’ve been hearing live and on the Internet, some for a couple of years.

Lyrically, Lewis generally doesn’t lead with his political views (though his stance is often to be found for those who look), he has been publicly outspoken in ways few Country artists dare in these complicated, polarizing times. “I believe in this country, I believe in the Constitution that created it, I believe in conservative capitalism, I believe in all the things that made this country great, and I will not shut up about that for anyone,” he states.

“And if you don’t like it, don’t talk politics with me, because I’m constitutionally correct in every single thing I say.”

As to whether his outspokenness has impacted his career, Lewis says, “It’s not hurting me as far as I know, but I couldn’t give a damn, I don’t care. And, honestly, I could care less if I lost a couple of people because of that along the way. If you can’t enjoy my music anymore because you don’t see eye-to-eye with me, then so be it. Whatever.”

And, after putting his heart and soul on the line to create SINNER, Lewis feels similarly about how it lands in the marketplace. “You can’t make everybody happy,” he says, “so you put your best foot forward, you hope everybody likes it, and if they don’t, f- ‘em.”