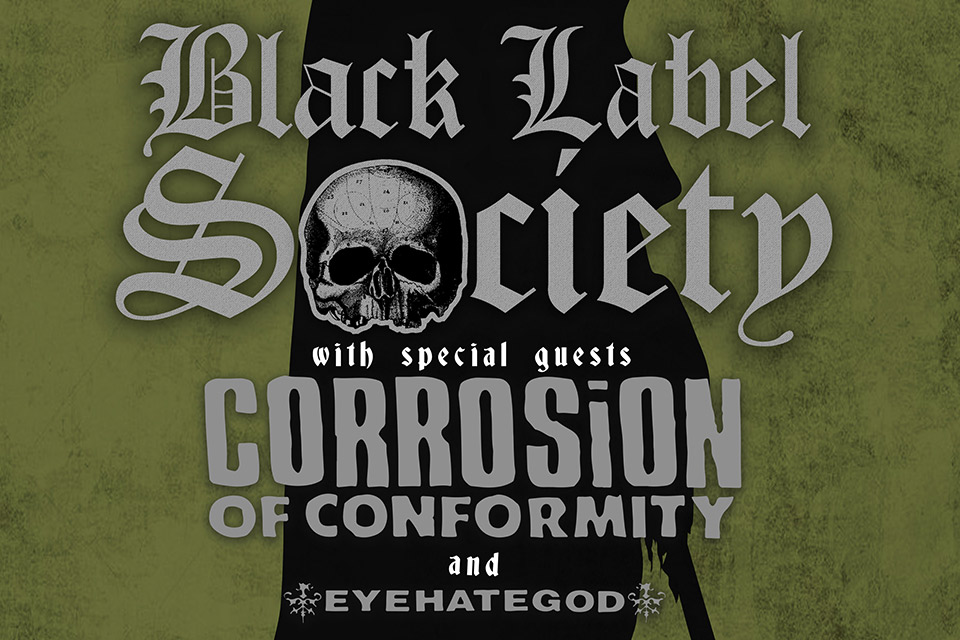 Black Label Society bandleader Zakk Wylde wields his guitar like a Viking weapon, bashing out thick riffage and squeezing out expressive squeals as if the glory of his Berserker brotherhood depends upon every single note, which of course, it does.

Charismatic beast and consummate showman, Wylde puts his massive heart and earnest soul on display with unbridled, unchained, animalistic passion in Black Label Society, whether it’s a crushingly heavy blues-rock barnstormer or a piano-driven ode to a fallen brother. Each Black Label Society album is another opportunity to top the one before it, but like AC/DC or The Rolling Stones, BLS isn’t here to reinvent the wheel. If it ain’t broke, don’t fix it. It’s a brand we can trust.

Mighty missives like “Damn the Flood,” “In This River,” “Stillborn,” “My Dying Time,” “Queen of Sorrow,” and “Blood is Thicker Than Water” have amassed millions of downloads and streams. They are the soundtracks to sweat soaked revelry, jubilant evenings that descend into bewildering mornings, and adrenaline fueled sports.

Grimmest Hits , the band’s tenth full-length studio album and follow-up to Billboard Top 5 entries Catacombs of the Black Vatican (2014) and Order of the Black (2010), Black Label Society submit new anthems like radio single “Room of Nightmares,” the bluesy “Seasons of Falter,” and Southern-fried “The Day That Heaven Had Gone Away” to the BLS faithful; 12 unstoppable tracks to add to that lifestyle soundtrack.

While members of esteemed rock and metal institutions like Alice In Chains, Metallica, Type O Negative, Clutch, Danzig, and Megadeth have passed through the band’s ranks, Black Label Society has consistently been defined by Wylde’s unmistakable voice and signature guitar sound and the steady rumble of bassist John DeServio. BLS is rounded out, in the studio and onstage, by guitarist Dario Lorina (since 2013) and powerhouse drummer Jeff Fabb (since 2012).

This is as much a band as it is a symbol of strength, honor, commitment, and diehard “society,” as evidenced by the legions of supporters who proudly donned the Black Label Society colors years before motorcycle culture was back in fashion.

To many, Wylde is synonymous with pinch harmonics as much as Chuck Berry dreamt up the duck walk. Zakk’s signature Les Paul Bullseye guitar hangs in the Rock N’ Roll Hall of Fame. His infamous leather bellbottoms hang in the Grammy Museum. His handprints are on Hollywood’s Rock Walk of Fame. He’s performed the National Anthem at major sporting events. He wrote the 2013 Major League Baseball theme for ESPN. He even momentarily joined Axl Rose, Slash, and Duff in Guns N’ Roses. He is a playable character in the Guitar Hero games.

A lifelong disciple of Black Sabbath and the longest serving guitar-shredder for the Ozzman himself, Wylde co-wrote modern Ozzy Osbourne classics like “No More Tears,” “Mama I’m Coming Home,” “Road to Nowhere,” and “Miracle Man.” Together with Ozzy bassist Blasko and drummer Joey Castillo (ex-Queens Of The Stone Age), Wylde pays faithful tribute to the forefathers of metal as frontman for Zakk Sabbath.

Before he graced the cover of every meaningful guitar magazine on the planet, Zakk Wylde was a kid in New Jersey who picked up his instrument before he’d even hit high school. He was still a teenager when he got his demo tape into Ozzy’s hands. Together with the man he affectionately calls “the Boss” (and whose wife and manager, Sharon, he calls “Mom”), Wylde was part of the biggest selling album of the legendary Black Sabbath singer’s solo career, No More Tears , as well as the double-platinum Ozzmosis , and earned a Grammy for the live recording of “I Don’t Want to Change the World.”

One part invading horde and all parts traveling carnival party, Black Label Society traverses the world powered by caffeine and cacophony. BLS engages and inspires audiences everywhere they go, on every radio dial they burn, inviting all comers to join in and participate in their brotherhood and sisterhood of hard rock and vigor.