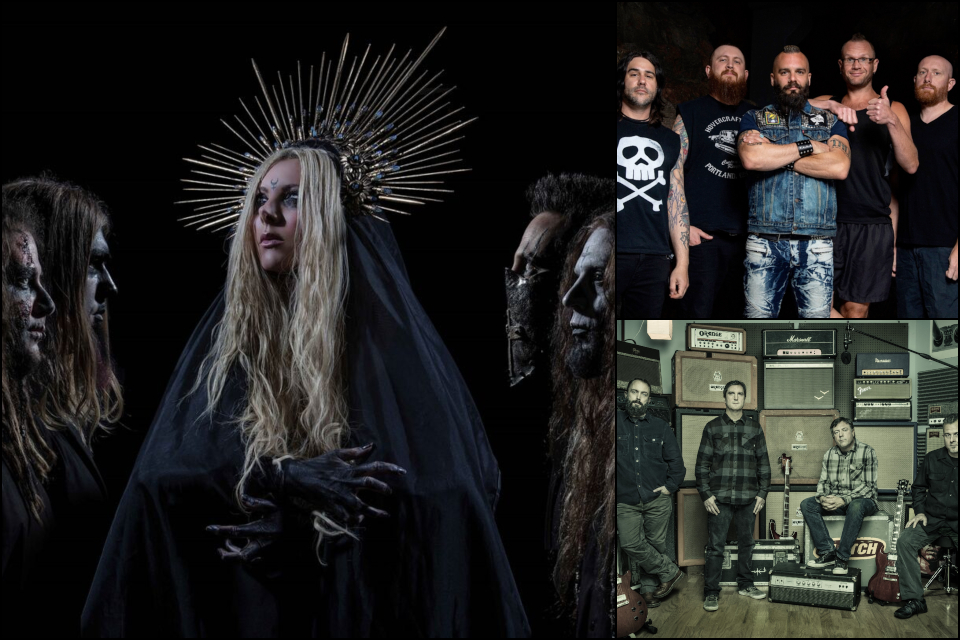 IN THIS MOMENT
Throughout history, art rejoices and revels in the wisdom of women.

“It’s like we’re going into the next realm,” asserts Maria. “I had a conviction of feeling empowered in my life and with myself. I always write from a personal place, and I needed to share that sense of strength. I’ve never been afraid to hold back. Sometimes, I can be very suggestive. However, I wanted to show our fans that this is the most powerful side of myself and it’s without overt sexuality. It’s that deeper serious fire inside of my heart.” “What Maria is saying comes from deep inside,” Chris affirms. “This time, we had a bunch of ideas started before we hit the studio. There was a really clear direction. It’s different.”

The group spent two years supporting their biggest album yet 2014’s Black Widow. Upon release, it seized their highest position to date on the Billboard Top 200, bowing at #8. Simultaneously, it clinched #3 on the Hard Rock Albums chart and spawned a series of hits such as “Sick Like Me,” “Big Bad Wolf,” and “Sex Metal Barbie”—all cracking 8 million Spotify streams each and topping Rock Radio. Meanwhile, the band’s signature smash “Whore” crossed the 20-­million mark.

Furthermore, the title track off In This Moment’s 2012 album, Blood, has been certified gold by the RIAA. A remarkable accomplishment, the companion music video for “Blood” has been viewed over 27 million times. Between headline tours, they incinerated stages everywhere from Rock On The Range to Download Festival. In March 2016, Maria and Chris commenced writing for what would become the new record with longtime collaborator and multiple GRAMMY® Award-­nominated producer Kevin Churko [Five Finger Death Punch, Ozzy Osbourne] at his Las Vegas compound. Following a high-­profile summer 2016 tour with Korn and Rob Zombie, the duo began writing.

Then, Maria visited Salem, MA for the very first time with all of the women in her family quite appropriately during Halloween. “We were really tapping the energy there,” she says. “We were honoring each other. I was seeking inspiration and experience to inspire me in this album. I was trying to find a lot of truth in myself. I loved Salem. I was blown away by how visually beautiful it is. The history of the witch burnings is fascinating. It was a special ceremonial journey.” Galvanized and inspired, Maria and Chris returned to Kevin’s stronghold to complete recording.

In an atmosphere of candles, crystals, incense, and a cackling fireplace, they expanded their aural palette once again, welcoming a doom blues bombast into the sonic fold. “We love Black Widow, but it was very electronic,” Chris explains. “This is a little more organic, emphasizing guitars, bass, drums, and vocals. We slowed down the groove a little bit. I got to play some slide guitar, and I’ve never done that. There’s a bluesy side, which we’ve also never had.”

“We always want to grow and evolve,” Maria adds. “It was a chance to get a little more serious.” That progression shines through the first single “Oh Lord.” A minimal drum and handclap echoes as Maria’s wild incantation takes hold. Guitars shiver and shake as the frontwoman delivers an undeniable refrain.

“The meaning of ‘Oh Lord’ is central to the album,” she reveals. “I should be able to have a relationship with what I perceive God to be. For me, it’s this strength and light. When I was younger, I felt guilty for thinking of these things. I’m not supposed to touch an oracle card, a tarot card, or these beautiful things, because they’re ‘bad.’ I had these fears in me for a long time like, ‘Is this wrong?’ I realized I don’t have to be afraid anymore. There’s a lot of learning and an awakening in that one.”

Inverting everyone’s favorite Billy Idol nuptial anthem, “Black Wedding” sees Maria walk down the aisle of musical madness with none other than Judas Priest frontman Rob Halford. Co-­written with Stevens, it’s an explosive and enchanting duet. “I can’t believe that happened,” beams Chris. “Maria hit up Rob and asked if he was interested. He jumped right on it. I can’t believe we got him.”

“Who doesn’t love ‘White Wedding?’,” laughs Maria. “We wanted to do a spin-­off that’s creative. It’s a question-­and-­answer between me and another voice. The chorus essentially says this isn’t going to be the opposite of a happy ending! You’re becoming empowered by heartbreak.”

Chris breaks out the slide on the raging “River of Fire,” while “Witching Hour” dances around the flames to a new wave-­inspired groove and midnight lore as Maria recants, “This idea of me being burned as a witch in a past life for teaching people to be free.” Elsewhere, “Roots” practically opens up the earth with its sheer seismic force.

“Sometimes, I have to go through pain in order to forgive and let go,” she adds. “I love to thank the hate in people. It’s that sort of energy. I’ll be okay, hold my head strong, push forward, do what I’ve got to do, and prevail.”

Simultaneously, In This Moment breathe a dark new life into the Phil Collins’ classic “In The Air Tonight.” “We can’t reproduce what he did in a million years,” she says. “It’s one of the best songs ever. We did our own interpretation and made it a little more sinister like our ritual.” The ritual has begun, and In This Moment ignite a brighter fire than ever before here. “When fans hear this, I want them to feel the music, whether they take away sadness, anger, or happiness,” concludes Chris. “As a kid, I remember listening to records and putting them on repeat over and over again. I’d love for the world to listen and absorb this as a piece of work.”

Maria leaves off, “I want everybody to be unafraid of who they are and not worry about what the rest of society says. Be strong. Be loud. We love our fans deeply. I hope everybody feels that love and powerful in who they are.”

KILLSWITCH ENGAGE
No matter the climate, KILLSWITCH ENGAGE makes trend-resistant, timeless heavy music that feeds the soul, touches the heart, and strengthens the mind. Their anthems and live staples like “My Last Serenade,” “My Curse,” and “In Due Time,” have the staying power that appeals to all generations of rock and metal fans worldwide, along with a message that serves to unite, enlighten, and entertain. Having shared the stage with acts ranging from Rise Against to Slayer, the diversity and versatility of their touring is unparalleled and a true testament to their reach.

Leach wears his heart on his sleeve like never before, coming out of the experience of making INCARNATE a brand new person. It’s an album of reclamation and redefinition, from a band that still rules the scene.

The reckless abandon of creative passion, the search for higher truths and personal justice, and the authentic reality of the duality within all people – the light, the dark, the playful, the deadly – these are the components that comprise KILLSWITCH. They are the elements of KILLSWITCH ENGAGE, INCARNATE.

Maryland rockers Clutch have been pushing the boundaries of heavy rock music since the 4 original members got together in high school.  Having been tagged hard rock, blues rock, southern stoner rock and alternative metal by media and fans across the world it is safe to say one thing… “What you see is what you get” and what you get is a musical force that has been best described as the quintessential American Rock Band.  Clutch quickly became known for their relentless touring schedules, playing shows from whiskey stained 2 door venues in the hills of West Virginia to the iconic Brixton Academy in the UK.  Whatever the venue, and wherever rock fans congregate Clutch has played there.  The band has shared stages with Lamb of God to Iron Maiden, Primus to Thin Lizzy, Mastodon to Motörhead.  What has come of it is a cult-like International fan base, not to mention praise from all corners of the music world.

“Few bands exude such cool and confidence, such adept musicality, and above all else, an ability to entertain to the extent that every performance feels like an historic event.” – Alex Milas

Clutch’s “The Regulator” was the first outside, original song by a band to be featured in the AMC series “The Walking Dead” (S2/ mid season finale).  Country music megastar Eric Church uses Clutch’s “Electric Worry” to open his live set.

“Clutch are a sound and hearty bunch of fellows that everybody should pay attention to NOW.” Lemmy Kilmister, Motörhead

“I want to tour with them just so our audience, if they’ve never seen them, can see them, and so I can see them every fucking night.” Corey Taylor, Stone Sour

“Clutch make me wanna get up in the morning!!” Ricky Warwick, Black Star Riders

“Clutch is infectious…..the kind of band that gets your head moving and your feet tapping uncontrollably!” Rob Caggiano, Volbeat

“Clutch is the only true-to-form, straight-up, pure rock ‘n’ roll band around.” Gary Susalis, Sen. Mgr. of Programming/PD of All Things Rock for Music Choice

“They’re a THC-propelled collision of Bad Brains and Captain Beyond, the sound of ZZ Top colliding with Fugazi.” Scott Rowley, Editor in Chief, Classic Rock, UK

“At the risk of sounding hyperbolic, there really aren’t any rock acts better than Clutch out there right now.” Jeff Treppel, Outburn Magazine

The Iowa based hard rock band SAUL is the result of a profound passion for music shared by brothers Blake and Zach Bedsaul. They always knew music would be their life and worked tirelessly to develop a sound that pushes the boundaries of modern rock music. SAUL places a great amount of focus on writing songs that mean something. Forming their sonic inspiration listening to bands like Tool, Pearl Jam, Nothing More, and Tesseract, the band went through a few lineup changes after high school, but the sound was starting to take shape. Blake and Zach had a vision and kept writing and working tirelessly until they brought that vision to life. That vision is a sound that is both modern and precise, but also chaotic and turbulent. SAUL has now rounded out its lineup to include William McIlravy (Bass guitar/Backup Vocals), Joe Nichols (Drums), Blake Bedsaul (Lead Vocals), and Zach Bedsaul (Lead Guitar/Backup Vocals). Everyone shares the same passion and the music reflects their chemistry as a band. SAUL is already gaining massive amounts of attention in their home state of Iowa and beyond. Bringing in new fans with every performance, you can hear the soul of the music and get lost in its timeless, aggressive, and haunting melodies. Set to release their debut studio effort (AEONS) in the spring 2019, SAUL isn’t holding anything back. The first single is an emotional roller coaster about death and the struggles of dealing with loss. “Brother” is the embodiment of the band and its message. It is how music should be. It’s real, raw, aggressive and satiated with intent. Front-man Blake Bedsaul states the following in regards to the new single, “Lyrically, this song defines what I should have said to my brother in his last moments. This song cuts deep for me and It’s a constant reminder that life is fleeting. Tell the people in your life that you love them.” On January 24th, 2019 SAUL plans to announce their arrival by not just tapping you on the shoulder, but punching you in the face with their lead single, “Brother”. Keep an ear out for the track on radio airwaves nationwide.