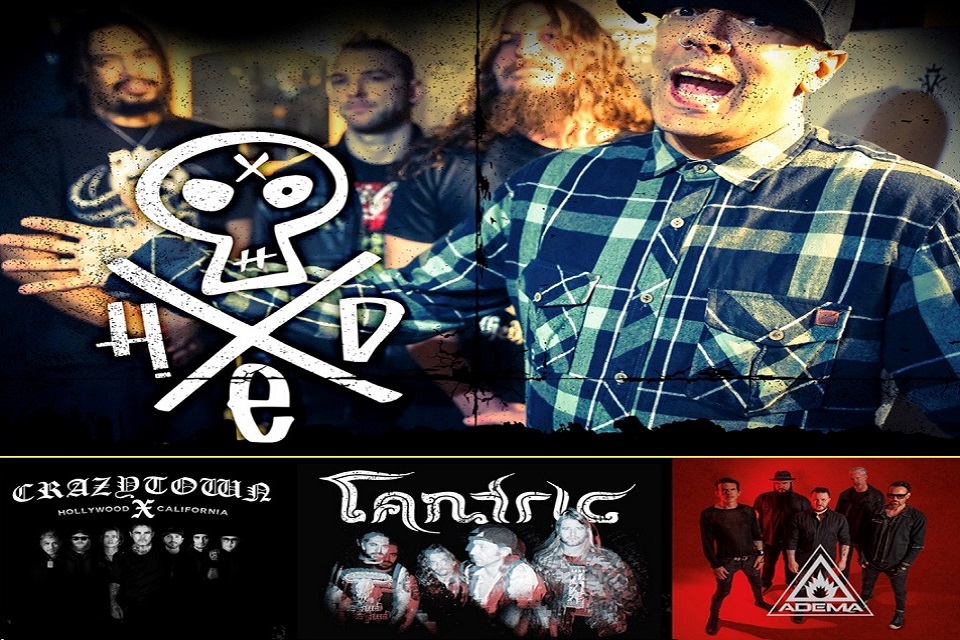 Since 1994 (hed)p.e. has been turning heads with their brand of original and unique music. The band has been called everything from rock, metal, punk, reggae, rapcore, and more. With such a vast career and 10 studio albums, the band has earned their place as one of the most original and well respected acts on the planet (earth that is!).

“We here at (hed)p.e. come to bring inspirational music for the worldwide family. I want my people to know its okay to fall, JUST GET THE F**K UP! Our mission: to go forward with our music and shine a light in the darkness. Blending metal, reggae, hip hop and punk, we’ve cultivated a worldwide underground following. Inspiring revolution and reflection every step of the way” says vocalist and founding member Jahred.

Crazy Town is an American rap rock band formed in Los Angeles, California, in 1995 by Bret Mazur and Seth Binzer. Crazy Town is best known for their 2000 hit single, “Butterfly”, which reached number one on the US Billboard Hot 100 chart and helped their debut album, The Gift of Game sell over 1.5 million units.

In January 2017, after a year of hiatus from the band, Epic announced through his Facebook post that he will no longer tour with the band. Epic intends to still be involved with Crazy Town, though not as a band member. Following Mazur’s departure, Rick Dixon, Nick Diiorio and Kevin Kapler also left the band in early April. Shifty decided to add an “X” next to the band’s name. When asked about the letter’s significance on their Instagram account, the band stated “the X is used by gangs to symbolize a territory that has just been won”.

Adema is a nu metal band from Bakersfield, California. The band formed in 2000 with members lead vocalist Mark Chavez, vocalist/guitarist Tim Fluckey, guitarist Mike Ransom, bassist Dave DeRoo, and drummer Kris Kohls. The band released their first two albums, Adema, and Unstable, which brought the band worldwide success. In 2005 they released the album, Planets, followed in 2007 by Kill the Headlights and the 2013 EP Topple the Giants.

The band’s eponymous debut album, Adema, was released in August 2001 to moderate success. Its two major singles, “Giving In” and “The Way You Like It,” received significant airplay on rock radio. The album was produced by Bill Appleberry (7th House) and Tobi Miller (Wallflowers guitarist). Adema’s eponymous debut album was certified gold, and the band received a spot on the main stage during the Ozzfest tour. They kept playing live with the Music as a Weapon, SnoCore Rock, and Projekt Revolution tours. In 2002, Adema released Insomniac’s Dream, an EP, as a “gift to fans.” The single from the album, “Immortal,” was written for the video game Mortal Kombat: Deadly Alliance. Besides the single, it included a track from international versions of Adema, a cover to Alice in Chains’s “Nutshell”, and four remix versions of songs from Adema. 2002 also marked Adema’s inclusion in the Resident Evil Soundtrack, contributing the track “Everyone” from their debut album. Adema’s second album, Unstable, was released by Arista in August 2003. It was produced by Howard Benson, whose credits also include producing albums with P.O.D., Hoobastank and Cold.

As of 2019 Adema continues to record and tour globally with new vocalist Ryan Schuck.

Louisville-based post grunge rock group Tantric have defined themselves through 6 studio albums as a groove laden, guitar rich rock band with dense vocal harmonies and infectious vocal melodies. Frontman Hugo Ferreira’s unique soulful baritone vocals, ranging from angsty rasps to melodious melancholy are a testament for the signature Tantric sound. Along with the usual intricate guitar work and infectious riffs layered over complex textures has become the hallmark of the Tantric sound. Tantric has endured for a career of 15 years, and although band has gone through many label and lineup changes over the years, Ferreira has managed to keep the entity that is Tantric alive and well. “I consider Tantric a boat that I float in—it’s a vessel that carries the music. So I never feel restrictions. It doesn’t have any rules. Tantric music can be super-heavy, light–or both It’s really an open book with no ending in sight”, says Ferreira