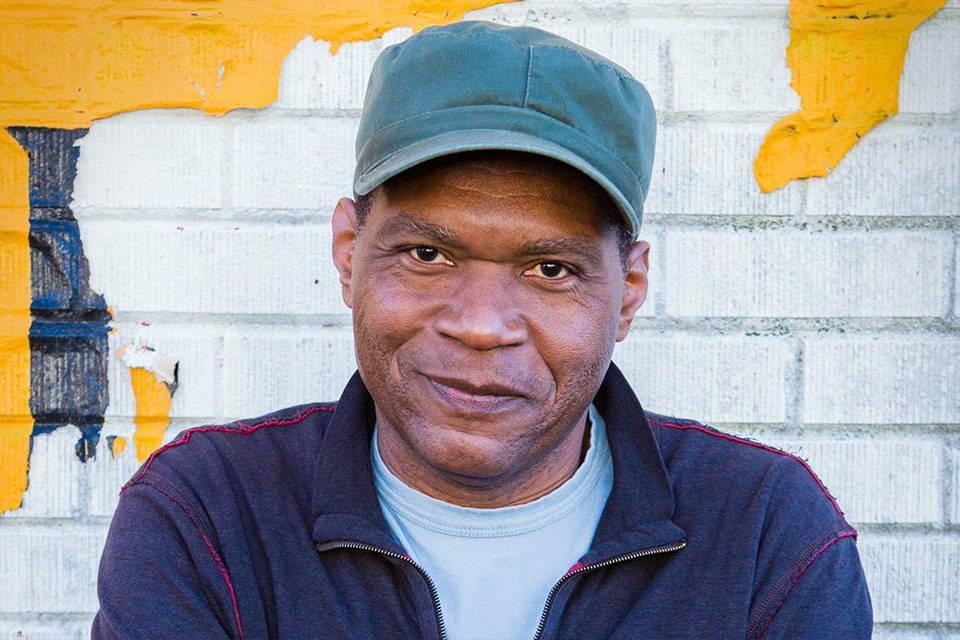 “You gotta keep your ears open and expand your mind.” – Robert Cray

Open ears and an open mind are the essence of singer, guitarist and songwriter Robert Cray’s approach to writing, recording and playing music. He has created a sound that rises from American roots and arrives today both fresh and familiar. In just over 40 years Cray and his band have recorded 20 studio releases, 15 of which have been on the Billboard charts, and played bars, concert halls, festivals and arenas around the world. There are five Grammys with Cray’s name on them, and he has a suitcase full of W.C. Handy blues awards. Four years ago Cray was inducted into the Blues Hall of Fame

On August 28 the Mascot Label Group will celebrate the vibrancy of the Cray Band’s rocking rootsy blues, soul-filled ballads and timeless R&B with the release of 4 Nights of 40 Years Live. Through clips of concerts from the 80s and four recent shows, the evolution from the Cray Band unfolds. Comments by Cray and band members add depth. And interviews with Eric Clapton, Keith Richards, Bonnie Raitt, Jimmie Vaughan and Buddy Guy put the band in perspective. The 3- piece set will be available in a variety of formats – 2 LPs + Mp3, 2 CDs + DVD, Blu-Ray + 2 CDs and digitally.

Growing up in the Northwest, Robert Cray listened to the gospel of the Five Blind Boys of Mississippi, Bobby Bland’s soul, Jimi Hendrix’s rock guitar and the Beatles pop sounds. He would bring all of the influences into play throughout his career, but his teenage band was captivated by Southern Soul and the blues. “In the early days of the band we were getting back into O.V. Wright and paying attention to my favorite blues players; Buddy Guy, Otis Rush, Albert King and especially Albert Collins,” Cray says.

The Texas-born blues guitarist known as Master of the Telecaster, Albert Collins, sealed the deal on the Cray Band’s early direction. The musical highlight of Cray’s senior year was his class voting to bring Collins in to play a graduation party.

The glow of a career in music began when Cray was a teen, and in 1974 it burst into flames as the Robert Cray Band came together in Eugene, Oregon. How strong was the fire? “Richard and I didn’t own a vehicle, and we were staying with his girlfriend in Eugene. We hitched a ride to Salem, where our drummer Tom Murphy was going to school, to rehearse,” Cray recalls.

With the group’s 1980 debut release, Who’s Been Talkin’, word about the Cray Band began to spread across the Northwest and down in to California. Playing packed bars and roadhouses the Cray Band was thrilling. Yes, fans could hear an Albert Collins guitar riff and a Howlin’ Wolf song but the sound was present. Blues and soul fans showed up religiously, but those steamy raucous sets also drew crowds whose tastes in music ranged from rock to funk and jazz.

Also among the Cray Band admirers were other musicians. John Lee Hooker put his appreciation into action. “The first time we played with Hooker was in Montana. We were opening the set and he was playing solo,” Cray recalls. “We’d never met him before but he just walked on stage and started playing with us. We dug the hell out of the guy, and after that we were friends.”

The Cray Band’s next two releases – Bad Influence and False Accusations – charted, taking the four-piece’s sound across the airways and abroad. The group was on a roll, but the players slept on couches. “We were just road rats,” Cray says with a chuckle. “We’d take a break for two weeks to record, then go back out. We didn’t have a house, a home, any of those responsibilities.” On one of those breaks Cray went into the studio with Collins and another great Texas guitarist and singer, Johnny Clyde Copeland, to record Showdown!, a CD that has become essential to any 80s electric blues collection.

It was the sounds of the blues and soul that first drew attention from artists in the rock arena. In an interview on the DVD included in 4 Nights of 40 Years Live, Eric Clapton gives his initial response to Robert Cray saying, “As a blues fan, we’re saved.” The Cray Band’s beginnings did bring the sounds of its mentors into the mainstream, even taking the music of John Lee Hooker, Etta James and Albert Collins to a larger, younger audience. But no one knew how broad the band’s audience would be until the Cray Band opened the ears of rock radio programmers. With the 1986 release of Strong Persuader the Cray Band’s tunes were put in heavy rotation on mega rock stations across the nation. The first hit, “Smoking Gun,” was followed by “I Guess I Showed Her” and “Right Next Door (Because of Me).” The Cray Band’s next two releases, Don’t Be Afraid of the Dark and Midnight Stroll, brought more radio listeners to record stores, increasing sales of the group’s CDs.

Following the path of fame taken by blues-based rockers like Johnny Winter and Stevie Ray Vaughan, Cray became a sensation, leading his band in concerts at large arena and rock festival. He was the first African American artist since Jimi Hendrix to rise to such fame in rock music. Was there a change in the band’s direction or had the blues arrived again into the mainstream after more than three decades of being forgotten by radio? “We were doing blues and Rand B from the first,” Crays says. “That’s just part of what we do. If you’re writing a tune it’s only natural to grab something from someplace else. You’re gonna put in some soul changes and some jazz, something you’ve been listening to. With what we do there’s a whole lot of room to move.”

Clapton’s admiration for Cray led to a writing collaboration on the hit “Old Love,” which featured Cray on guitar. A call came from Rolling Stone guitarist Keith Richard who asked him to be in the film he and Steve Jordan were producing about the rock guitarist Chuck Berry, “Hail! Hail! Rock ‘n’ Roll.” Concert footage in the film features Richards, Jordan, Clapton, Julian Lennon, Linda Ronstadt and Etta James. Cray performs “Brown Eyed Handsome Man” with Berry. Dressed in a baby blue tuxedo jacket, the young guitarist is the epitome of the tune’s title. Cray also performed on the Tina Turner TV special “Break Every Rule.”

During the 90s the Cray Band was featured in concert with artists like Clapton, the Stones, John Lee Hooker, BB King and Bonnie Raitt, who on the DVD declares the band leader is “an original; he’s passionate, he’s a bad ass and puts on one of the best shows you’ll ever see.”

Amidst these accolades, soaring record sales and a packed touring schedule the Cray Band recorded six CDs in the 90s. Cray produced Shame + A Sin, which referenced his blues roots, in 1993. It was followed by two more self-produced recordings, Some Rainy Morning and Sweet Potato Pie. Recorded in Memphis and featuring the famed Memphis Horns Sweet Potato Pie was the Cray Band’s most soulful album to date. The next recording Take Off Your Shoes delved even deeper into Memphis sounds of the 60s. “That was definitely a soul record,” Cray says. “I’d already been writing songs, Jim (Pugh, who was keyboards with the Cray Band from 1989 to 2014) was writing songs, leaning toward soul. Steve (Jordan, producer) heard them and put the icing on the cake.” Jordan, who subsequently produced the Cray Band’s In My Soul, Shoulda Been Home and the first CD in 4 Nights of 40 Years Live, also brought the personification of Memphis soul to the recording session, Willie Mitchell, to help with arrangements for the Memphis Horns. Mitchell discovered and first recorded Al Green along with other Southern Soul singers like Ann Peebles, O.V. Wright and Syl Johnson for the famed Memphis label Hi Records. When he arrived at the Cray recording session, he brought not only the Memphis presence but also a present. “Willie came over – he was wearing a gold jacket – and gave me this song, ‘Love Gone to Waste,’” Cray says. “Then we put some final touches on the CD at his studio in Memphis. It was a great opportunity to see Willie in the studio.”

Both on Take Your Shoes Off and 4 Nights of 40 Years Live, “Love Gone to Waste” showcases Robert Cray’s natural ease with soul ballads. He is intense but smooth in telling the story of love gone bad. Then in a falsetto voice he soars through the sadness into the inevitable pain. It is a song that Cray owns because no other singer has dared try to do it justice. Take Your Shoes Off won a Grammy in 2000.

In the next decade the Cray Band recorded seven CDs, three of them live, and two – Twenty and This Time – were nominated for Grammys. The group’s most recent recordings, Nothing But Love and In My Soul put the band back on the Billboard Charts.

The multimedia 4 Nights of 40 Years Live is a testament to the band’s longevity and vitality. The 80s concert footage is exuberant and shows the charisma of Young Bob (a reference in song that Cray makes to himself in homage to Muddy Waters calling himself Young Muddy) as a guitarist, vocalist and band leader. The live performances at recent concerts capture seasoned musicians bringing a vivid, illustrative past into the moment. Cray’s Stratocaster solos sing, cry and take on the funk. His voice has grown richer and wiser yet remains sweet.