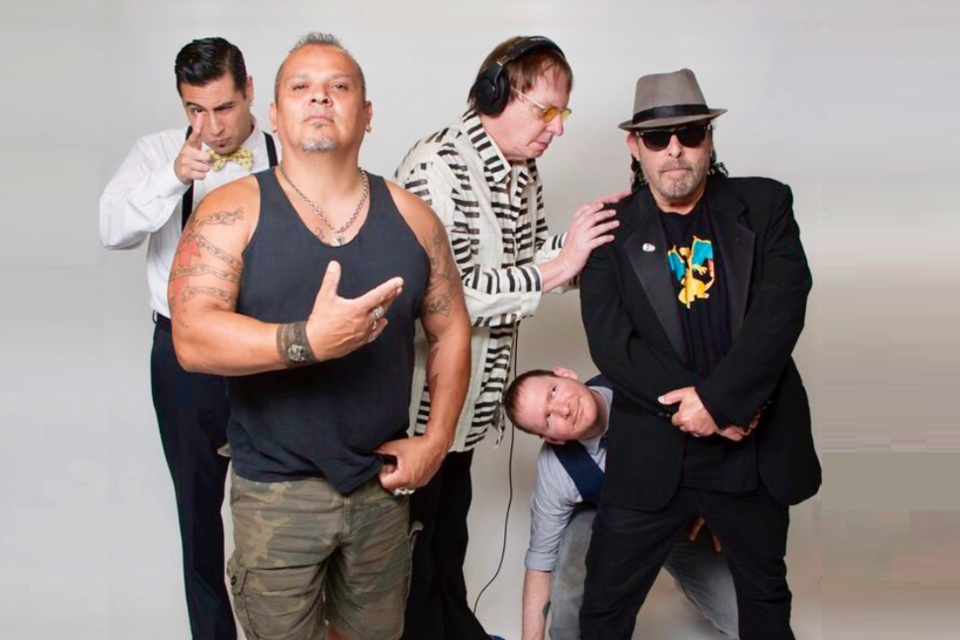 They were the first L.A. punk rock band to score a major label deal, the first to go to Europe, the first to go insane, and more-or-less the only known survivors from the first wave of punk pioneers. The Dickies have done it all and more and lived to laugh about it. Their uplifting, (some would say zany) pure punk, melodic-pop style has remained in tact for over twenty years!

Ever since the break-up of the Ramones, the Dickies hold the title of being the oldest active punk band in the land. These guys have released records and played punk shows in FOUR different decades. Yowzers! The band’s epic career is matched only by their wacky high-octane live performances. With Stan Lee’s buzzsaw guitar and frontman Leonard’s demented dance moves, the Dickies remain as one of the most rockin’ bands around today. No fire-breathing or acrobatic posturing for these veterans; Leonard’s repertoire consists of inflatable dolls, scuba gear, and a large penis puppet named Stewart. Now that’s entertainment!

The story of how the Dickies came to be on Fat Wreck Chords is a modern-day punk rock fable of fate. Fat Wreck prez Fat Mike got his portly paws on a four song demo in 1996 and contacted the Dickies in hopes of releasing a full length. Upon receiving the first call from Fat Mike, Stan had this to say: “Who?” Stan then called up Leonard in hopes that he could enlighten him about this mythical Fat recording company. Leonard responded in kind with a “Fat what?” Someone in the Dickies camp knew what’s what however, and encouraged the band to work with Fat Mike. So not long after Stan explained to Mike that they “have a whole record worth of shit.” Now you may be wondering why it is that the full length was not released until 2001. Well folks, Stan lied. But hey, all’s well that ends well!

Their legacy of recorded works (ahem, trying not to get too carried away here) includes the groundbreaking (sure, why not?) Incredibly Shrinking Dickies, the sophomore(ic) Dawn of the Dickies, the indie-punk classic Stukas Over Disneyland, the prophetic Second Coming, the EP built around their theme song to the cult-hit movie Killer Klowns from Outer Space, and the long player Idjit Savant. Then came Dogs From the Hare That Bit Us, an all-covers collection. It was in 1996 that the Dickies met up with Fat Mike and agreed to release the 7″, My Pop the Cop on Fat Wreck Chords. This led to the inevitable release of their latest and greatest full length, All This And Puppet Stew. It is reasonably safe to say that the Dickies are perennial favorites the world over, adored by fans ranging from grizzled geez-punks to kids not yet born when the Dickies were first incredibly shrinking.

The release of All This And Puppet Stew will surely breathe some life into the lungs of the Dickies and the punk scene. These furious fogeys may be old, but they tour like young’uns! They can still pull full U.S. tours and have been to both Europe and Japan in the last year. Catch the Dickies on tour and in your pants soon, and be on the lookout for Leonard and his maniacal stage props!