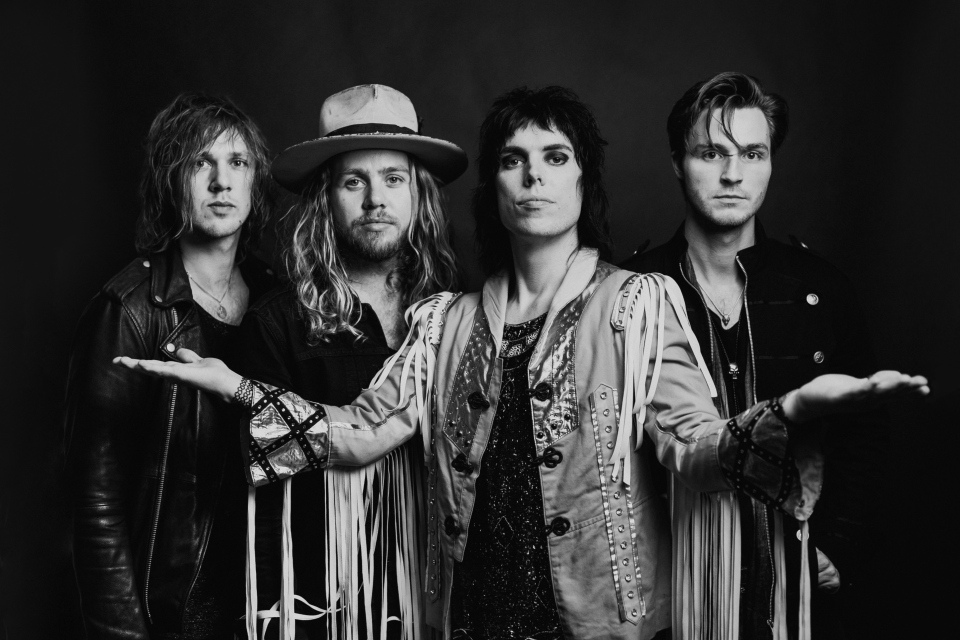 The Struts with Des Rocs

In just a few years, The Struts have found themselves massively embraced by some of the greatest icons in rock-and-roll history. Along with opening for The Rolling Stones, The Who, and Guns N’ Roses, the U.K.-bred four-piece was hand-picked by Mötley Crüe to serve as the supporting act for their last-ever performances, while Dave Grohl praised them as the best band to ever open for Foo Fighters. After making their full-length debut with 2016’s Everybody Wants, The Struts now return with YOUNG&DANGEROUS — a sophomore album that cements their status as one of the most unstoppably passionate and endlessly thrilling bands making rock music today.

On YOUNG&DANGEROUS, The Struts let loose with the sing-along-ready and riff-heavy sound they’ve brought to stadiums and arenas all around the world. Working with producers like Butch Walker (Weezer, Panic! At the Disco) and Sam Hollander (Fitz and the Tantrums, Neon Trees), the band adorns that sound with deeper grooves and more inventive textures, dreaming up a majestic glam-rock revamp that’s unabashedly fun but full of pure heart.

The lead single from YOUNG&DANGEROUS, “Body Talks” brings that dynamic to a blues-spiked track capturing what Spiller calls “that moment when you mosey on over to someone on the dancefloor, and the music’s blaring so loud you can’t even talk to each other.” In creating an alternate version of “Body Talks,” The Struts amped up the song’s seductive power by enlisting Kesha to lend her soulful growl to a fiery duet with Spiller. The Struts also infuse some social commentary into YOUNG&DANGEROUS sending up selfie culture on the falsetto-laced epic “In Love With A Camera,” taking on trolls with the swampy and smoldering “Bulletproof Baby,” and pondering identity with the sweetly melodic “Who Am I.” And for the soaring and glorious “Primadonna Like Me,” The Struts brilliantly turn the lens on themselves. “It was written about my stage character, my alter ego,’” notes Spiller. “It’s this completely deluded guy running around his small town, all dressed to the nines—a full-on 21st century dandy going around saying, ‘Don’t you know who I think I am?’”

Formed in Derby, England, in 2012, The Struts almost instantly drew a major following with their outrageous live show, and later made their debut with Have You Heard (a 2015 EP whose lead single “Could Have Been Me” hit #1 on Spotify’s viral chart). Before they’d even put out their first album, the band opened for The Rolling Stones before a crowd of 80,000 in Paris and toured the U.S. on a string of sold-out shows. Known for his lovably swaggering stage presence—the very factor that gave The Struts their name—Spiller soon inspired legendary designers like former Queen costumer Zandra Rhodes to custom-create his lavish and glittering onstage attire. As the frontman points out, that heightened element of spectacle is all a part of the band’s mission of making an unforgettable impact on the crowd. “We believe in giving our absolute all every night, because that’s what our fans deserve,” he says. “The goal is always to get everyone dancing and screaming and shouting, and to make sure they leave dripping in sweat with huge smiles on their faces.”

With the release of YOUNG&DANGEROUS, The Struts have undoubtedly met another of their main ambitions as a band. “One of the things we most want to do with our music is inspire young people to pick up a guitar again,” says Spiller. “We live in a time that’s very much dominated by hip-hop and dance music, and that’s a great thing, but we want to give the world a big reminder that there’s something else going on out there. This album is our way of saying, ‘If you feel a little out of place, there’s always an electric guitar—and just look at what you can do with it.’”