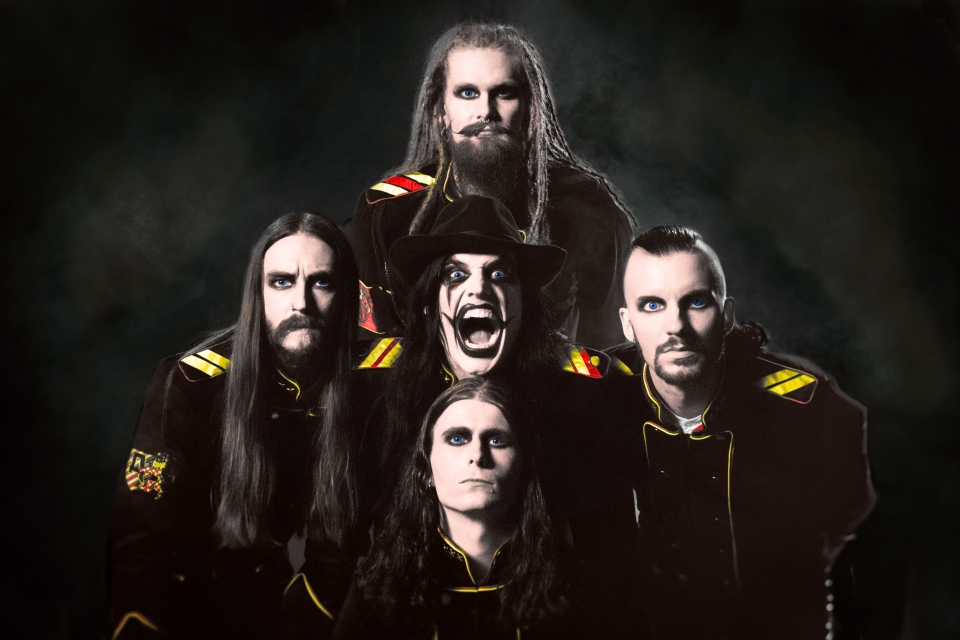 Avatar with Devin Townsend, Dance with the Dead & '68

This used to be a barren land. Valley after valley with nothing but frozen deserts and dried out river beds. The people doomed to live here were nomads, wanderers of Dystopia. Their fingers were worn down to the bone as they spent their existence searching for ancient roots to eat. It was as if they were kneeling, praying to the soil, to remember what it was like to be alive. Born into starvation, held captive by the cold.

Then he came. The first one. It was an alien sound to ears who had only ever known the howling wind and their own dragging feet. Hooves. Galloping hooves. First very distant. Then closer. And closer. And closer. Then they could see him. The sight was even stranger than the sound. High upon a mighty steed rode a lion of a man clad in a red cloak. Tied on his back was a strangely shaped axe with six strings.

The wanderers of the dead land gathered around him as the horse came to a halt. He dismounted and stood in the middle of the crowd. A circle of hollow eyes and dried lips looked back at him. He spoke:

“Where there is silence, there shall be sound, and it shall be LOUD!”

He took his axe and held it high in the air.

“Where there is a sky, there shall be thunder, and it shall be LOUD!”

Then, with a force not seen in this land for millennia, he struck the ground. The sound was deafening and made the people fall over. The earth started to rumble and the sky darkened, only to be lit up by lightning. The heavens were torn apart by the storm as the clouds twisted and twirled as if in convulsions.

It started to rain. And from the crack where the axe had struck, water started to rise. The people kneel to drink.

“I am the chosen one, for I have chosen myself! This land which was once dead is now alive. And it’s mine!”

The crack in the ground was growing as the water came faster and faster. The man went down on one knee and reached down into the crack. From the depths, he retrieved a golden crown that he put on his own head. He stood up and looked around at the people who were still kneeling in the rising water.

“You are no longer lost wanderers, you are Citizens! This is no longer a wasteland! This is Avatar Country!”

He then picked up his axe and struck the six strings. The sound was devastating and made the sky clear up, just ever so slightly to let a few rays of sun break through for the first time since memories and stories came to be. Finally, the people woke up from their near eternal slumber. They looked around, saw thunder, rain, lightning, sunshine, and flood. As terrifying as it was, they knew that this wasn’t signs of the end time. This was signs of the beginning. So they said:

“GLORY TO AVATAR COUNTRY! GLORY TO OUR KING!”

There are many myths that surround the origin of Avatar Country and of how the King ended up becoming king. Above is one of the more popular ones as it emphasizes many of the things the Citizens love about their ruler. He brings sound where there is silence and He creates a home where there was none. He takes everyone in need and makes them belong and he protects them.

No one remembers for how long the King has been King. Time is a confusing concept in Avatar Country as the nation is in a constant state of celebration. Looking back it almost seems as if he is immortal, although there is evidence that suggests otherwise, at least to a degree. In the Royal Museum of Paintings of the King, we can observe that the King seems to have been around for at least as long as we’ve been able to preserve visual art. There are sculptures depicting a bearded man, with a lion’s mane and a crown, dating back to long before the invention of the metronome and even the dropped guitar tuning.

Regarding the mortality vs immortality of the King, we have the famous painting “The Procession of the King” after the “Battle of the Decibel Limits” which shows the body of a fallen King being carried by his officers, back from the battlefield. However, hanging in the next room is the painting “Victory in Volumes” which is the depiction of the final moments of same said battle, where we can clearly see the King, alive and well, raise the PA volume to desired levels. The confusion gets even bigger as there are documents supporting that both these events took place, more or less, in the way they’ve been shown here.

So is the King eternal? Well, the fact that both paintings in question are over 300 years old makes a good case for this being very much possible. For it is without any doubt the very same king who recently posed for the minting of the current Avataro coin, that we see in this painting. Even the tattoos are spot on.

As this is being written the Ruler of All Things Worthy of Being Ruled has decided in coalition with the Royal Court to open up the borders of Avatar Country and take applications for Citizenships from all across the globe. The decision was made after the Royal Department of Measurements of Things That Should Be Measured concluded that the METAL veins of the Land were rich enough to supply the globe with enough heavy nutrition without starving the blackened souls of His Highness’ fellow countrymen.

As it turns out, the Royal Mad Scientist’s Laboratory and Research Center has determined that the METAL resources of Avatar Country has a most unique quality. Not only does its use to feed the souls of the starving, removing any need for other food sources, but on top of that it turns out that it has a property that has been dubbed “Sharing is caring and caring is King.” This special trait means that Avatar Country’s METAL resources actually multiplies each time it’s consumed. In short, METAL makes METAL more METAL. Who would’ve thought?

In the pitch black, yet loving and always righteous, heart of the Most Potent One every man, woman, and child is already a glorious Citizen of Avatar Country. Most are just a canceled appointment with the hairdresser away from making the cut.

Trade deals are being made with all of the discovered world, but it hasn’t been pain-free. Diplomats and negotiators who have wandered the globe to spread the good will and intentions of the Masterful and Magnificent Myth of a Man King have had a hard time explaining the properties of the rare mineral found only in Avatar Country’s METAL mines. Sadly the outside world has shown to be somewhat underdeveloped in their taste and vocabulary when it comes to understand and appreciate the true value of METAL the way we know it. Luckily, the King of All Kings Who Have Ever Had the Audacity to Call Themselves Kings has taken it upon himself to educate the people of Earth on their way to Citizenship.

The Chamber Of Food Pyramid Schemes has found that although inhabitants have learned to consume their METAL through their skin, eyes and all general and particular body openings, people in other countries seem to mainly consume their scarce portions through their ear canals. The Kingelikookeliking has therefore alongside His elite orchestra put together a sonic remedy, named after the nation it represents. Avatar Country the Album can be consumed and purchased everywhere where sounds generally are.

GLORY TO OUR KING!