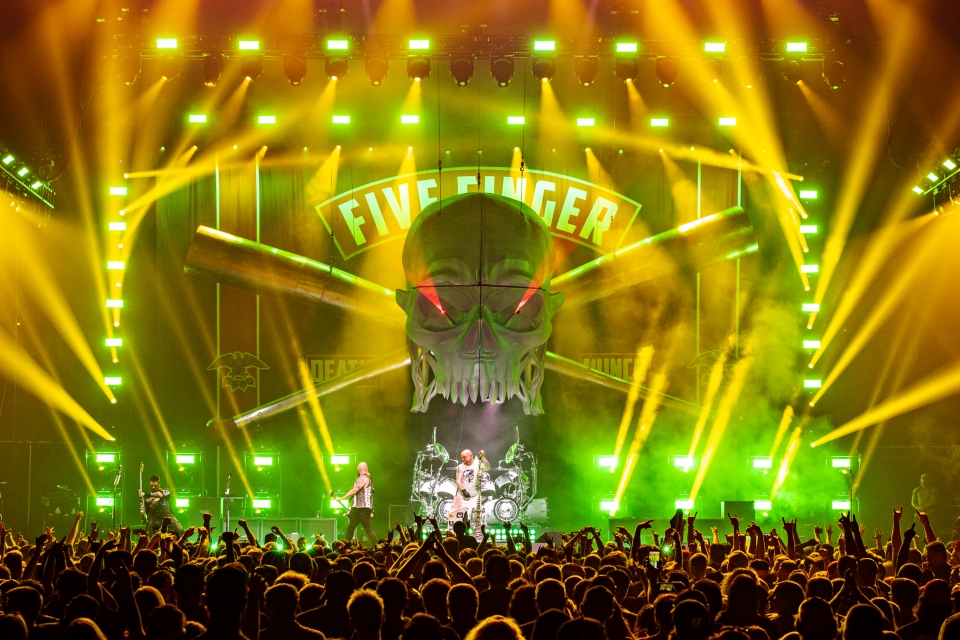 Five Finger Death Punch with Fire From the Gods

TICKET PRICES:
General Admission – $48.50
Rock Star Lounge (A general admission area located on The Patio at Main + Abbey with access to a private bar. Tables and chairs are available on a first come, first served basis. Views can be obstructed at times.) – $115
Elevated Reserve (A tiered, elevated section with assigned seats. Cocktail service is provided.) – $125
Bud Light Party Tent (Assigned tables and access to private restrooms and a private bar. Cocktail service is also provided. The entire table of 4 seats must be purchased in this section.) – $135 per ticket; $540 for the table

A hard rock band sticks to its guns in face of a fickle mainstream market, refuses to compromise its principals for anybody, amasses millions of fans by doing so, and quietly ascends to multi platinum chart-topping success in every corner of the globe. It’s a similar storyline shared by everyone from Black Sabbath and Judas Priest to Metallica and Iron Maiden. However, the canned modern millennial response to such a narrative is, “It’s impossible now,” “Kids don’t listen to that”–or the evergreen favorite, “Rock is dead.”

Raising the preferred middle digit, the quintet—Ivan Moody [vocals], Zoltan Bathory [guitar], Jeremy Spencer [drums], Jason Hook [guitar], and Chris Kael [bass]—fuel the beating bloody heart of 21st century hard rock. Arriving with a bang in 2007, they’ve unleashed a total of three RIAA platinum-certified albums, three gold albums, a platinum single, and generated 2 billion global streams to date (in this century). As they became “one of the most-streamed rock acts in the world,” 2015’s Got Your Six catapulted to #1 on the Billboard Top Rock Albums Chart and #2 on the Top 200. Recognizing their staunch commitment to supporting the military, The Association of the United States Army honored the boys with the prestigious “Soldier Appreciation Award.” Moreover, they’ve graced the covers of Revolver, Metal Hammer, and Kerrang!, to name a few.

Backed by sky high flames and blockbuster production befitting of their ambition, no crowd has been safe—from Download and Rock Am Ring to Rock on the Range and Jimmy Kimmel Live! On international headline runs, millions of “Knuckleheads” congregate at sold out arenas everywhere.

This unbelievable story continues in 2018 with their seventh full-length the aptly titled, And Justice For None. A brash bloodletting of airtight riffing, muscular grooves, and seismic melodies, these 13 tracks see Five Finger Death Punch maintain that signature intensity, while getting ballsier, bolder, and bigger.

“And Justice For None is the next natural step in our evolution,” explains Spencer. “Each record is like a snapshot in time. We always try to push ourselves and do slightly different things while sticking to our sound. We definitely tried some new flavors on these songs. We came along at a time when there wasn’t a lot of heavy stuff being played on radio. We’ve had a loyal fan base who empowered us to grow from side stages to arenas. We’re honored by them, so we do what we do: we made another Five Finger Death Punch record.”

Zoltan Bathory, Guitarist of Five Finger Death Punch offers “We always explore and comment on current, socially relevant events and this album is no exception. The album cover and title is a somewhat sarcastic metaphor of the state of the World Today. There is no dialogue, there is no conflict resolution, and everyone is launching rockets at each other, both verbal and actual. The divide is so wide; the screaming is so loud that no one is actually being heard and even if they were, everybody is offended by everything anyway. If you cure cancer there is an idiot somewhere who has a problem with that… If there is no self-reflection, if there is no empathy, if there is no common ground–then in the end everyone loses so there will be Justice For None…”

Once again, the group hunkered down in its home base of Las Vegas with longtime producer Kevin Churko [Ozzy Osbourne, Disturbed] behind the board a year after Got Your Six. In the studio, they collectively stepped up their game as a unit.

“We just understand each other so well,” Spencer continues. “There’s a huge level of respect on both sides. He gets the best out of us.”

A cinematic cover of The Offspring’s “Gone Away” introduced this chapter. The orchestral darkness underscored Moody’s haunting and hypnotic delivery as the track clocked over 8.8 million Spotify streams and 18 million YouTube/VEVO views in a few months’ time.

Next up, “Sham-Pain” kicked down the doors as the first single. A guttural guitar gallop charges ahead as the frontman rails against detractors and trolls of all kinds with clever and catchy soul over an unpredictable beat.

“Ivan was going through something personal, and he was just venting,” the drummer elaborates. “There’s a cool shuffle and a different vibe, which is something we’ve never done. It’s a great way to introduce the record. Ivan’s like the ambassador of anger,” he smiles.

The musicians tracked the punchy and potent “I Refuse” in a backstage locker room, capturing raw intensity in the moment. Meanwhile, “When The Seasons Change” touts the most massive melody in their catalog yet upheld by expansive acoustic guitars and keys.

“We were feeling an acoustic piece,” he adds. “As usual, it’s a real story. There’s no filter. It’s our chill side.”

The most surprising outlier comes in the form of battering ram blues on the Kenny Wayne Shepherd cover “Blue On Black.” Distorted guitars curl around pummeling percussion before bleeding into a swaggering chant.

“It’s a track from Kenny Wayne Shepherd’s Trouble Is… record,” he says. “We always liked the song, so we gave it a show. We honored the original, but we made it as Death Punch as we could. It’s a unique piece on the record.”

In the end, Five Finger Death Punch have only just begun to leave their mark on rock music with And Justice For None.

“We’re grateful for everything,” he leaves off. “It’s amazing to hear we’ve written the soundtrack to many people’s lives. We hope we can live up to what audiences expected. That’s it. We want them to walk away going, ‘Dude, they did it again.’”