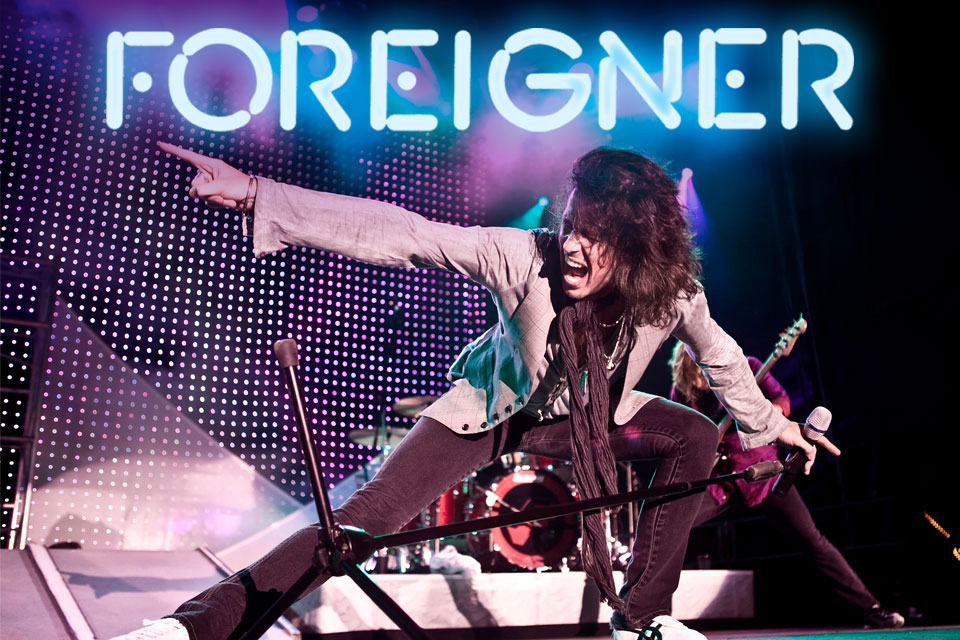 With 10 multi-platinum albums and 16 Top 30 hits, FOREIGNER is universally hailed as one of the most popular rock acts in the world with a formidable musical arsenal that continues to propel sold-out tours and album sales, now exceeding 80 million.

Responsible for some of rock and roll’s most enduring anthems including “Juke Box Hero,” “Cold As Ice,” “Hot Blooded,” “Waiting For A Girl Like You,” “Feels Like The First Time,” “Urgent,” “Head Games,” “Say You Will,” “Dirty White Boy,” “Long, Long Way From Home” and the worldwide #1 hit, “I Want To Know What Love Is,” FOREIGNER still rocks the charts more than 40 years into the game with massive airplay and continued Billboard Top 200 album success.  Audio and video streams of FOREIGNER’s hits are approaching 15 million per week.

With more Top 10 songs than Journey and as many as Fleetwood Mac, FOREIGNER also features strongly in every category in Billboard’s “Greatest of All Time” listing.  At times, the band’s weekly catalog sales have eclipsed those of Led Zeppelin, AC/DC, the Rolling Stones, the Who, Def Leppard, Van Halen, Aerosmith and most of their Classic Rock peers (Source: Nielsen SoundScan).  FOREIGNER‘s catalog sales were recently celebrated in Business Insider as hitting the Top 40 among the Best Selling Music Artists of All Time.

Founded in 1976, FOREIGNER‘s debut album produced the hits “Feels Like The First Time,” “Cold As Ice” and “Long, Long Way From Home.”  The album Double Vision followed, as did a string of hits including “Urgent,” “Juke Box Hero” and “Waiting For A Girl Like You.” Those songs helped give FOREIGNER‘s next album, 4, its impressive run at #1 on the Billboard chart. At the zenith of 80’s sound, FOREIGNER‘s fifth album, Agent Provocateur, gave the world the incredible #1 global hit,” I Want To Know What Love Is.” This musical milestone followed the record-breaking song “Waiting For A Girl Like You.”

Jones reformed the band after a 2002 hiatus and selected lead singer Kelly Hansen to help write an inspired new chapter in the history of FOREIGNER. One of rock’s greatest showmen, Hansen is among the most respected, consummate professionals in rock and roll. With a 40-year career that spans almost every area of music, from the role of lead vocalist to producing and engineering, Hansen has led FOREIGNER into the digital age while inspiring a whole new generation of fans.

With renewed vitality and direction, FOREIGNER hit the Billboard charts again with the 2005 release of their live Greatest Hits album, Extended Versions. Can’t Slow Down followed in 2009 and entered the Billboard chart in the Top 30, driven by two Top 20 radio singles, “In Pieces” and “When It Comes To Love.”  To follow was the release of the band’s three-disc set, Feels Like The First Time, which included an acoustic CD with an intimate and unique re-interpretation of many FOREIGNER classics, studio re-records by the new lineup and a live performance DVD showcasing the group’s exceptional live energy.

In May 2014, Atlantic Records Chairman Craig Kallman presented the band with RIAA gold and platinum digital awards for six FOREIGNER songs.  These awards signify 500,000 and 1,000,000 downloads of FOREIGNER hits.  That is more individual awards than any other heritage rock band, and an illustration of FOREIGNER’s  resonance in the digital era.

In recent years, FOREIGNER has headlined several Live Nation tours, rocking across the country and the world with contemporaries and friends. In 2014, FOREIGNER headlined The Soundtrack of Summer US amphitheatre tour with Styx and Don Felder. A hits compilation album of the same name was released to coincide with the tour and immediately hit the Billboard Top 200 chart. In 2015, FOREIGNER joined Kid Rock on his “Cheap Date: First Kiss Tour.”

In October 2016, FOREIGNER hit a major milestone when the band performed for the very first time at New York’s iconic Carnegie Hall with a sold-out acoustic show.  The concert highlighted the band’s ongoing relationship with the GRAMMY Museum’s initiative to promote music education in our nation’s schools.  It included an a cappella contest among New York high schools who competed for a $5,000 prize donated by the band.

The year also brought the release of FOREIGNER‘s first ever live acoustic album In Concert: Unplugged, recorded at a once-in-a-lifetime private concert hosted by Edsel B. Ford II at the Ford Motor Company Conference & Event Center in Detroit, MI.  The band’s royalties were donated to JDRF (Juvenile Diabetes Research Foundation) and the album is available exclusively via Amazon.

The year 2017 marked the celebration of FOREIGNER‘s 40th anniversary.  The Warner Music Group released a double CD set “40,” which includes 40 songs recorded between 1977 and 2017.  The album spent several weeks on the Billboard Top 200 chart and it features two tracks recorded especially for this release, “Give My Life For Love” and a new version of “I Don’t Want To Live Without You.” The album spent nine weeks in the Billboard Top 200 chart.  The US anniversary headline tour played 40 shows across the United States where the band was supported by Cheap Trick and Jason Bonham’s Led Zeppelin Experience.

In April 2018, FOREIGNER topped the Billboard Classic Album Charts for the first time with FOREIGNER WITH THE 21ST CENTURY SYMPHONY ORCHESTRA & CHORUS, a live recording of FOREIGNER’s first-ever orchestral shows in Lucerne, Switzerland. The band went on to headline orchestral shows in the US, Europe, Australia and New Zealand throughout the year including sold-out appearances at London’s Royal Albert Hall and the iconic Sydney Opera House. In the summer of 2018, FOREIGNER starred in a thirty city Live Nation US summer tour with Whitesnake and Jason Bonham’s Led Zeppelin Evening in support.

The excitement continued in 2019 with the premiere of Juke Box Hero, the Musical in Canada. Following a series of sold-out workshops in Alberta and Calgary, the musical premiered in Toronto in February and a Broadway run is on the horizon.

The November 2019 release of Double Vision: Then & Now is a DVD/CD package that celebrates the 40th anniversary of the iconic album.  It features a stunning reunion concert that brings together the current and original band members playing all the hits at the top of their game.

2020 kicked off with a three-day run at the Schermerhorn Symphony Center with the Nashville Symphony Orchestra in mid January.  Another highlight was a sold out January/February residency at The Venetian, Las Vegas.  The Covid-19 nightmare forced the band to postpone almost a hundred shows all over the world including a sold out show with Whitesnake at the 18,000 seat London 02 Arena.

The Covid impact on the live concert business continued through much of 2021, although by careful observation of health protocols, Foreigner was able to execute a limited, but highly successful touring schedule breaking box office records in many markets.  Following spectacular shows at LA’s Greek Theater and the Santa Barbara Bowl, the band embarked on a run of theater and major casino dates and other special events.  These included appearances at Detroit’s Fox Theatre and the Hard Rock Live at Etess Arena in Atlantic City.  Another highlight was an appearance at the Annual Gala of the American Turkish Society, which celebrated the life of Mick Jones’ and Foreigner’s guiding light at Atlantic Records, Ahmet Ertegun. The year culminated with FOREIGNER’S appearance at the spectacular Macy’s Thanksgiving Day Parade.

2022 commenced with a three-week residency at the Venetian Resort in Las Vegas and the rescheduled co-headline UK tour with Whitesnake, and solo headline shows across Europe.  The year continued with an exciting schedule of headline appearances that included the New York State Fair, where Foreigner’s 38,888 plus audience broke the Classic Rock attendance record,  and a run of sold-out amphitheater shows with Kid Rock.  In the fall, Foreigner returned to international touring with sold out shows in France, Holland, Israel, and South Africa.

FOREIGNER announced the beginning of their Farewell Tour on national television on November 14th.  The tour will commence on July 6th, 2023 in Alpharetta, GA and we expect that it will take two years or so to complete.  The goal is to get to all the cities that the band has played since its reformation in 2004.

More about FOREIGNER — including individual band member bios, tour dates, merchandise, and more — can be found on the band’s official website, www.foreigneronline.com.