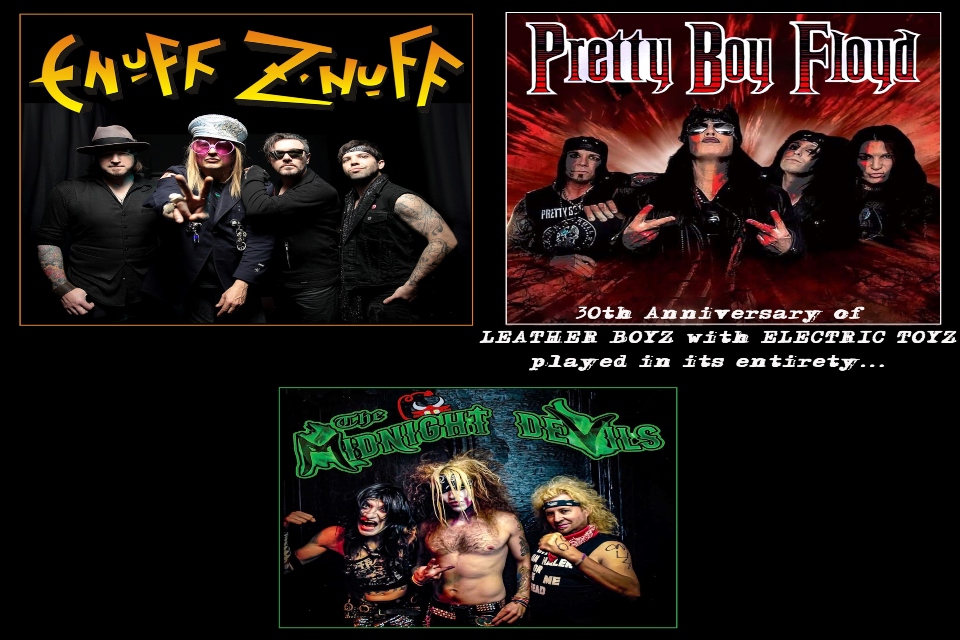 Enuff Z’nuff was formed in 1984 in Blue Island, IL. Its very first album release, Fingers On It, gave the band initial recognition when the track was featured in the 1986 cult move, Henry: Portrait of a Serial Killer. The album spawned two singles that changed the course of the band’s history, “New Thing” and “Fly High Michelle.” Both songs played constantly on the radio and gained heavy rotation on MTV, spending over 60 weeks in the top 10.

With the release of their 1991 rock album, Strength, Enuff Z’nuff became regulars on shows like David Letterman and Howard Stern and was featured in Rolling Stone’s hot issue as ‘the next big thing.’

Still a major force after 20+ albums, Enuff Z’nuff has earned a loyal legion of fans and the respect and acclaim of its peers and contemporaries.

The Midnight Devils are a national touring, high-energy glam slam boogie woogie rock ‘n’ roll band out of Omaha, NE and Chicago, IL, featuring Sam Spade on bass and vocals, Sniper on guitar, and the indestructible Jimmy Mess on the drums. Throwing all caution to the wind, this power-trio is a bad ass-lipstick smeared party rock ‘n’ roll band that takes glam to the next level.

Having done hundreds of shows from coast to coast in support of their debut album, Something Bigger, The Midnight Devils’ mix of rock ‘n’ roll, sexuality, and depravity are the perfect combination. The Midnight Devils have also toured as the direct support act for UK rock legends The Quireboys in early 2020 and Yngwie Malmsteen, Enuff Z’nuff, The Bullteboys, and Pretty Boy Floyd in 2021. Signing with Pavement Entertainment to release their sophomore album produced by Chip Znuff, The Midnight Devils are the rock ‘n’ roll force that can’t be stopped.

Pretty Boy Floyd is a glam metal band from Hollywood, CA, formed in 1987. They are most famous for their 1989 debut album Leather Boyz with Electric Toyz and its two singles, “Rock and Roll (is Gonna Set the Night on Fire)” and “I Wanna Be With You.” The band reformed in 1995 and has since released several new albums, including Public Enemies, which gained enough public love to send Pretty Boy Floyd performing worldwide in 2018.