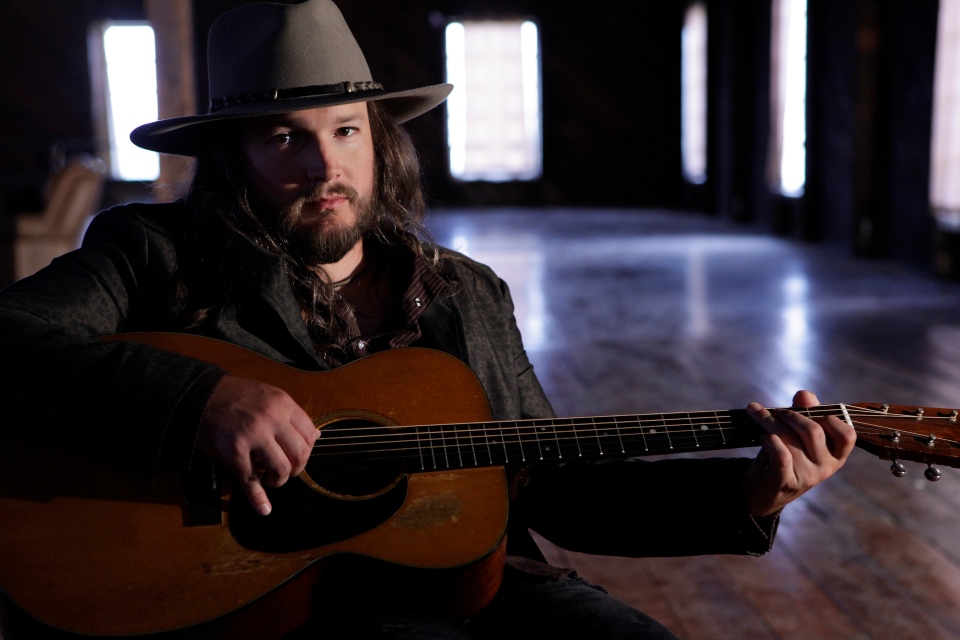 Think “New Hampshire” and let the images flow. Cozy inns. Fireplaces. Vivid colors of fall. Crisp, clean air. Deep blue lakes. Searingly honest songs, laced now and then by irony or heartache or weighted by weary wisdom. Vocals that jolt these lyrics to life with a unique immediacy and intensity —

Wait a minute. You won’t find that last part in any travel brochure. But on his upcoming debut album for Average Joes, Gods and Ghosts, Adam Wakefield proves it’s not where you come from that counts. It’s where you’re going and how you get there — which, in his case, is on the wings of undeniable talent.

What makes Wakefield different? First, it’s his varied roots: Memphis soul, rock ’n’ roll, New Orleans funk, even jazz and classical, pre-bro country — pretty much all music that speaks from the heart. In terms of genre, he follows no rules, though one resolution does govern what Wakefield wants to achieve: If it doesn’t have a conscience, if it’s afraid of risk or candor, then he’s not interested.

You can feel this throughout Gods and Ghosts, scheduled to release in late summer 2018. On the down-home, blues-steeped “Breaking Strings,” he writes and sings with wry, hangdog humor: “I found the meaning of life but I got no one to tell … I’m down on my luck, or luck’s down on me. I’m looking over my shoulder but there’s nothing to see.” A similar rumination unfolds over a classic country waltz time in “Cheap Whiskey & Bad Cocaine,” sung from the bottom of a glass or the end of a line: “I ain’t ever been on radio, barely got a dime to my name. Never walked down no red carpet, never had my 15 minutes of fame. But I know in my heart I could be a star. ’Til everyone else feels the same, I’ll be riding high as a Georgia pine on cheap whiskey and bad cocaine.” “Dry
Days” continues the story, this time over a bubbling acoustic guitar hook. “Back to the powder when the milk runs out,” Wakefield begins as he faces another one of his “too tired to try days.”

But there’s light ahead, as Wakefield awakens with a strangely clear head on “Good Morning Sunday.” To a woozy slow beat, steadied by a little accordion and steel, he notices with a touch of wonder the unfamiliar warmth of sunshine on his face and the cheery chirp of birds. He wishes he could claim credit for the experience but admits that the night before “I just tripped over the dog and the bottle fell from my hand. Now it’s in pieces on the floor .. here I am!”

The title track speaks to his loved one over an intimate acoustic guitar. This is a song about secrets too painful for even this most candid of songwriters to reveal — although in admitting to this, he reveals more than most of his peers dare to do. And on “Prairie Lullaby,” he sings for anyone whose mistakes have left them far from the ones who most matter: “I drive all night just to bring her home. We’d pick up where we left off long ago,” he imagines. But then, “I wake up … and put myself to sleep.”

Wakefield is that rare singer and songwriter who can bridge the personal and the universal, who can sadly laugh and softly ache through an uncommonly poetic lyric and performance. What accounts for his achievement? Maybe we should start at the place where he grew up, a small college town in the care of parents whose example encouraged him to imagine and explore.

“Even though they were poor, they were very educated and liberal. My mom worked for labor unions, helping coal miners and stuff like that. And she was a strong feminist, which is one reason I don’t write bro-country songs — she would disown me,” Wakefield says, with a laugh.

Instead, he absorbed deeper lessons, through frequent travels with his family as well as the lure of expressing himself through music. “Pretty much all we had were records and a piano and a crappy Chevy van,” he says. “I started playing the piano because I thought I could do it better than the girls who did it in show-and-tell.”

Turns out he could, to the extent that after high school he earned admission to the Jazz and Contemporary Arts program at New School in New York City. But as he sharpened his technique and deepened his understanding of music theory, Wakefield began to feel restless. As he recalls, “All I wanted to do was to be in a band, play piano and get high.” So he dropped out and moved with his brother John to Baltimore. They started their own band, Old Man Brown, and over the next several years toured up and down the East Coast as well as twice in United Kingdom. They released two albums, the first settling into a Southern rock vibe with Johnny Neel of the Allman Brothers producing. The second veered more toward soul and even a bro-soul focus, complete with horn section and backup singers.

As their popularity grew, Wakefield stepped up his output of original songs, not so much to pursue excellence as a writer, more to simply have something the band could play other than covers.“But I got better at it, the writing as well as the singing,” he says. “I attribute that to this routine we had in our band house. Everybody had to put five hours a week into individual practicing. We’d keep track of what we did with this schedule on the fridge. Band rehearsals were every night, Monday through Friday, with Monday night reserved for showing everybody what we had been working on. For young kids, we were strangely responsible.”

Wakefield’s approach to bettering himself as a singer involved addressing specific issues each night. “If I wanted to get better at singing runs and complicated stuff, I’d learn some Stevie Wonder stuff. To work on tone, I might learn some Gregg Allman. For range, it might be Donny Hathaway or Marvin Gaye.”

After his run with Old Man Brown, though, Wakefield decided to try his luck in Nashville. He and his girlfriend, an aspiring country singer, drove into town in their van. He formed a bluegrass group, started writing more seriously and made ends meet by painting houses. Opportunity struck when a scout for The Voice heard him play at Soulshine Pizza and invited him to audition. By the time he made it to the finals of Season 10, America had gotten the word about who Adam Wakefield is and what he has to offer. Working independently, he hit the top of the iTunes chart with “Lonesome, Broken and Blue,” the original song he performed during the season finale for The Voice. He also aced one of Nashville’s most challenging gigs when the SteelDrivers asked him to sit in for their lead singer Gary Nichols, who was taking some time off. “Honestly, it made me a better singer,” he insists. “And it helped me write better too. A few of songs on Gods and Ghosts come from that period. One of their songs, ‘Peacemaker,’ specifically inspired the droning lick I put at the beginning of ‘Shoot Me Where I Stand.’”

All of these experiences — on the road, in the studio, in writing rooms and on national TV — play into Wakefield’s artistry. “I’m not saying I’ve had a hard life,” he says. “But when I write songs about somebody dying or trying to get sober, these are experiences I’ve had. The more you wear your heart on your sleeve as a writer, the better the tunes seem to turn out. That’s what John Prine, Jamey Johnson and people in that vein do. That’s where I want to go with what I do.”

For updates on touring, new music and all things Wakefield, visit AdamWakefieldMusic.com.