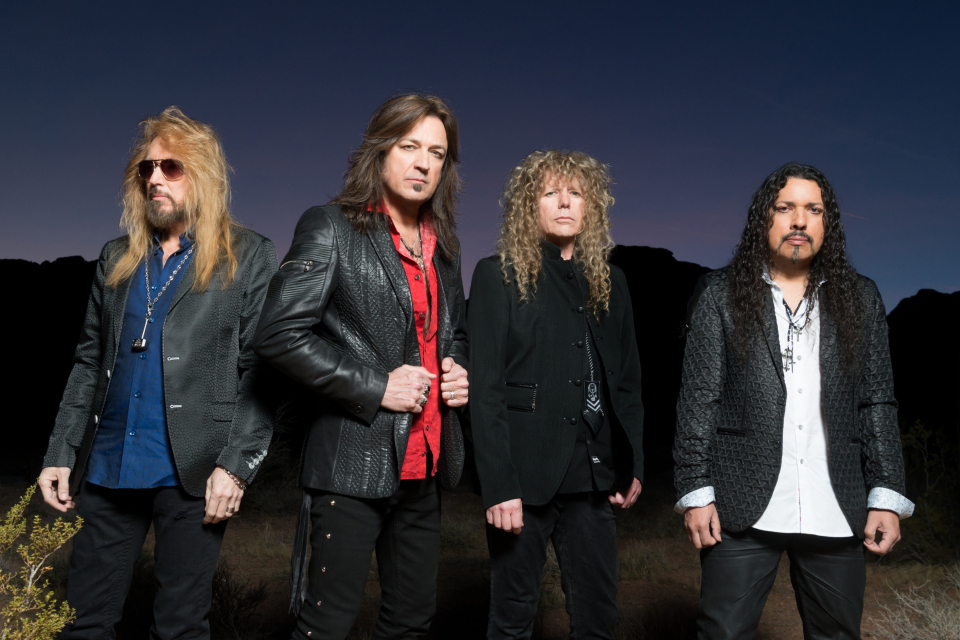 Established in southern California in 1983, multi-platinum crossover Christian metal band, Stryper, continues to share their positive message and energetic stage presence with a passionate following throughout the world. Since the band’s inception over 30 years ago, the founding members have stayed true to their deepest convictions, turning from “the ways of the world” and following their hearts instead.

“In the past 34 years, we’ve evolved into what we are now,” says vocalist and guitarist Michael Sweet. “This is what we always really wanted to be. I love the progression. The story of Stryper is that of an underdog. We seem to go against the grain with everything we do, and our fans tend to be the same – They’re good hardworking people who believe in love, respect, and not conforming to the ways of the world.”

The members of Stryper have proven themselves as metal stalwarts, leaving an indelible mark on the genre with each new release. With such hits as “Calling On You,” “Free,” “Honestly,” and “Always There For You,” Stryper’s album sales now exceed over 10 million worldwide. Add to that one of the most successful Christian rock albums ever, 1986’s multi-platinum To Hell With The Devil, and the unique distinction of being the first band in history to notch two songs in MTV’s Top 10 with “Free” and “Honestly.”

The band has managed to leave an enduring impression on pop culture, as well. Singer Michael Sweet spent months trending online when he was identified as the doppelganger of 2016 presidential candidate Ted Cruz, who went on to discuss the comparison on an episode of Jimmy Kimmel Live! Several movies have paid homage to Stryper’s cultural significance, too, including Drew Barrymore’s “Whip It” and “Pain & Gain,” starring Mark Wahlberg and Dwayne “The Rock” Johnson.

Since returning from a 12-year hiatus in 2003, Stryper has managed to release new music annually. Their most recent full-length album, Fallen [Frontiers Music SRL], reached #44 on the Billboard Top 200 and #2 on the Top Hard Music Albums chart. The group is now recording their next original album, which is due in April of 2018 and promises to be their most groundbreaking yet.

This year will also bring Stryper back on the road, where they’ll have a chance to connect with fans, new and old.  The line-up still features three of the original members, including singer songwriter Michael Sweet, his brother and drummer Robert Sweet, and guitarist Oz Fox. Recently, the group welcomed iconic bassist Perry Richardson (formerly of Firehouse), who will be joining them on tour.

“We’re excited about the next season of Stryper,” says Sweet. “ We have the best fans in the world and the band is at the top of its game musically and spiritually. We look forward to seeing everyone on the road.”